When a fox named Tails is suddenly trolled by two individuals from a nation of real-life Internet trolls, it initiates a chain of events leading to an all-out war between several opposing factions, influencing the lives of hundreds of characters. The Tails Gets Trolled saga chronicles the profound human drama resulting from these events, while at the same time providing an in-depth examination of the themes contained therein, including morality, vengeance, camaraderie, betrayal, romance, dark magic, drug use, and more...

WHAT IS TAILS GETS TROLLED?

Tails Gets Trolled is a webcomic series that was originally posted on the site DeviantArt beginning on October 10, 2011, with new pages being posted on Tailsgetstrolled.org since November 2019. It features alternate versions of characters from several different media properties, alongside original characters, in an absurdist story featuring multiple intricate plotlines going on at once. The comic did not pick up much interest until the website Something Awful discovered and began posting about the series in 2012, which put it into the Internet’s spotlight. Heaps of fan content was made about the work, and a community was eventually formed with many curious eyes watching the comic’s story unfold over the years.

It is also known for its distinctive art style and humor, which lead to many scenes from the comic becoming Internet memes. Here are some you may have seen before:

Being such a unique piece of art, Tails Gets Trolled has garnered a wide variety of reactions from the public at large, a few of which have been compiled here: 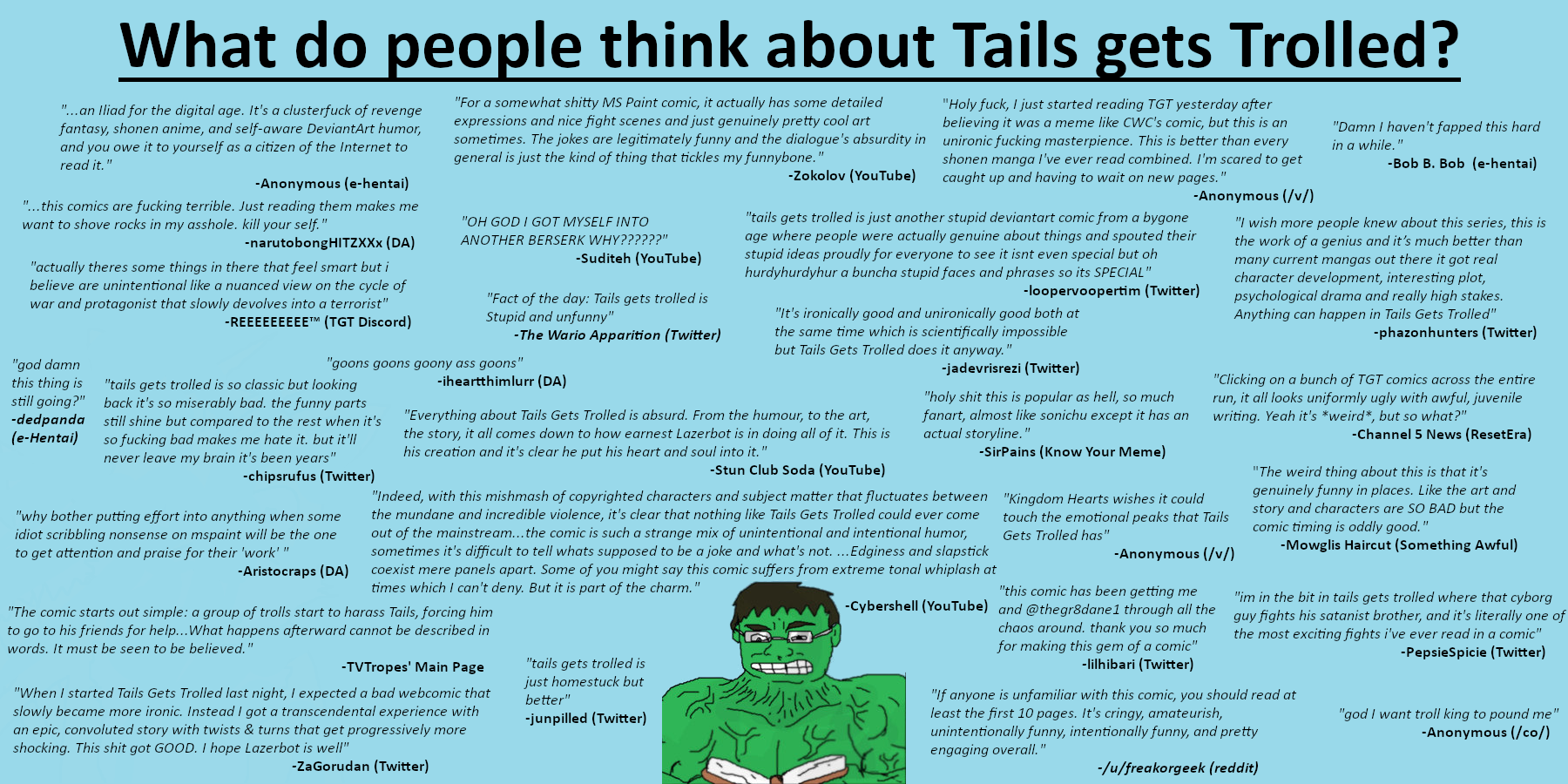 While these quotes do not represent what the Internet as a whole thinks of the comic, it is clear that Tails Gets Trolled has left vastly different impressions on people as they read it, both good and bad. How you interpret the comic and what you view it as is entirely up to you in the end.

It is important to note that Tails Gets Trolled may not be appropriate for all audiences, and those who are easily disturbed should probably not read it. It contains subject matter which could be potentially traumatizing, including but not limited to bullying, offensive language (profanity/slurs), graphic violence (blood/gore), sexual content, substance abuse, religion, suicide, and sexual assault.

Q: Wasn't Tails Gets Trolled some old DeviantArt comic that was cancelled years ago/a one page comic/one reaction image/a Friday Night Funkin' mod?
A: If you've read this far, you've probably figured out that the answer to these is no. As stated previously, Tails Gets Trolled is a webcomic series that has been in production off-and-on since 2011, with new pages still being released. At one point it was widely believed that the series was cancelled, but this is not the case.

Q: Who wrote Tails Gets Trolled?
A: Lazerbot was the primary writer for the first 5-6 chapters, while taking occasional suggestions from his brother, Embergram, who ended up landing a more prominent role in the comic's development afterwards, becoming its official co-writer. At some point during the comic's run, they drafted a general outline of the entire plot, which was still being followed as they continued to write the comic. The artists who joined the project later in the comic's run have no influence over the direction of the story.

In 2022, Embergram departed from the project, and is now mainly being written by Lazerbot and his other brother Shimshomo, though the known ideas that Embergram came up with for the overall plot are still being used.

Q: Who drew Tails Gets Trolled?
A: Lazerbot drew 99% of the comic up to Chapter 22 (2017), after which it went on an extended hiatus. The hiatus ended when in 2019, fans of the series got in contact with Lazerbot and Embergram to help them bring the series back as a collaborative project. This resulted in the brothers writing new scripts for the artists to draw out, with Lazerbot drawing his own pages as well.

Q: How long will Tails Gets Trolled be?
A: Even though there is a general plot outline, there is currently no estimate for how many chapters the series will be. Anything regarding this that was previously stated by the authors is extremely old info and no longer applies.

Q: Did Lazerbot leave the project?
A: In April 2021, Lazerbot announced he would no longer be working on TGT. However, this didn't change much about how the comic was being made at this point, as the story was already planned out and other artists were drawing most of the pages. A few months later, Lazerbot returned to work on the comic again, but in a more limited role, occasionally contributing some new artwork here and there and fleshing out the plot outline he drafted with Embergram. Since Embergram's departure in 2022, Lazerbot is once again leading the project with Shimshomo.

Q: Who drew X page?
A: The credits for every page since 2019 are listed at the bottom of each page.

Since nobody else was stepping up to preserve this magnum opus for future generations, CC took it upon themselves to compile the entire saga on one easily-accessible website. Around the same time, they also created a Twitter account to promote the website and Tails Gets Trolled as a whole, as well as a Discord server for fans to discuss the comic. These eventually became official and approved by Lazerbot and his brother, and also led to the un-cancellation of Tails Gets Trolled in 2019.

Q: Where does the money from the Patreon, donations, and merch go?
A: Patreon subscriptions and one-time donations are used to fund the creation of the comic, going towards the artists and writers. The merchandise sales go to Lazerbot, as he is the original creator who drew all of the art used on the products, and TGT.org Admin (CC) towards running the site.

Q: Am I allowed to make Tails Gets Trolled fan projects or original projects inspired by Tails Gets Trolled?
A: Yes! The authors love and appreciate all fan works. The only thing they ask is to "link our comic once posted as a source of inspiration and link us their project so we can share some exposure."

A quote from Lazerbot himself on this topic: "Truth is there's a lot portrayals of toxic and disfunctional behaviors in TGT. One of the main aspects of TGT is showing how those ways of life are destructive to others and the people living that way. Usually there are negative consequences for their self destructive nature."

Q: Was Tails Gets Trolled always meant to be what it is today? Was it an outlet for the author's anger at being bullied?
A: Lazerbot himself was not aware of what trolling was until and his friend got trolled on DeviantArt, which inspired the creation of Tails Gets Trolled. The series was initially intended to just be some quick doodles about how different people would react to being trolled depending on their personality, with Tails feeling sadness, Sonic feeling sympathy, and Shadow feeling contempt. It was not until a DeviantArt commenter suggested that Dark Sonic should kill the trolls in retaliation that Lazerbot decided to make it an ongoing story.

Q: What is the reason for the non-standard spelling, capitalization, punctuation, and grammar? Is it because he was a kid/from a non-English speaking country?
A: Lazerbot was homeschooled in his upbringing, which he says has played a role in his difficulty with grammar, and is shown in the early chapters of Tails Gets Trolled especially. He was 19 years old when the series began in 2011 and is from the United States.

Q: Is Tails Gets Trolled Sonic the Hedgehog fan fiction?
A: No, it defies the label "fan fiction". Not only is it a crossover featuring characters from a multitude of media franchises, not just Sonic, it's not really specifically based on any single one of them. It would be more accurate to say it's an original work that simply uses already existing characters, often times with wildly different personalities than their original incarnations, as a template to form a new story.

Q: Is Tails Gets Trolled supposed to be another Sonichu-like work? Is it a parody of or based on Sonichu?
A: The only similarities between Tails Gets Trolled and Sonichu are that they both feature Sonic characters and "crappy" art. Even then, their art styles look nothing alike. For one thing, TGT is drawn digitally while Sonichu consists of scanned physical drawings, and that's just the tip of the iceberg concering their differences.

More importantly, Tails Gets Trolled is a standalone story independent of its creator, while Sonichu requires some knowledge of Chris’ actual life to understand how the comic came to be, or the purpose of some characters. You do not need to know a thing of Lazerbot to understand or enjoy Tails Gets Trolled, barring the occasional joke. Additionally, Lazerbot did not know about Chris Chan or Sonichu until people started comparing them to TGT. 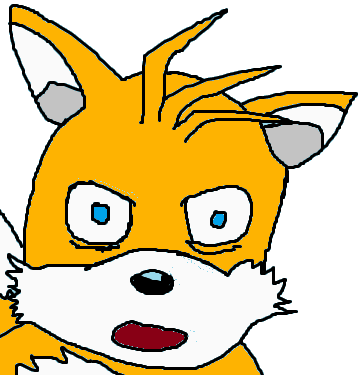